Mt. Baker’s willingness to partner with law enforcement to ensure that residents have safe and secure housing has been a critical component of this successful rehabilitation. 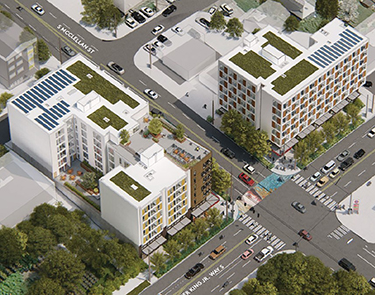 Rendering by Mithun [enlarge]
W.G. Clark Construction will build the two mid-rise apartment buildings, which are being designed by Mithun.

The two mid-rise buildings, designed by Mithun, have passed through design review. Last week, the Seattle Department of Construction and Inspections also issued SEPA determinations of non-significance, which clears a path to final permits.

W.G. Clark Construction will build Maddux North, at 2802 S. McClellan St., and Maddux South, at 2800 Martin Luther King Jr. Way. They’re on opposite sides of the intersection between those two streets. Both corner sites have been undergoing environmental cleanup, and the nonprofit property owner hasn’t yet announced a start date.

The specs haven’t changed much. The seven-story Maddux North will have 90 units, retail and restaurant space, and structured parking for 18 vehicles. It’ll have a roof deck also accessible to tenants across the street.

The seven-story Maddux South will have 102 units, retail and no parking. Both are a short walk to Mount Baker Station, two blocks west, along with the Lowe’s, QFC and other retail.

Commercial space for the two buildings totals about 7,900 square feet. Both will have bike rooms. Total project size, for both, is about 162,700 square feet. The developer has previously put a $56 million value on the project. Funding will come from a variety of sources, including federal and city dollars.

The Washington Department of Ecology is underwriting part of the environmental remediation from a former dry cleaner and gas station, but hasn’t yet signed off on the cleanup.